skip to main | skip to sidebar

Below are data from The Economist re public transit's problems in major U.S. cities. This is old news.  Most people prefer their private modes, mainly autos. But people's preferences are a distant second (or worse) when it comes to political allocations. There, rule.

Private transit allocations are also in the news. flow to where there are prospects of demand.  are Matt Kahn's musings re . It (and others that are already on the case and more that will follow) might even be a last-mile option for some would-be transit users. That might slow the long-term decline ("down the tubes") which goes back much further than the chart shows, no matter how big the subsidies.

for LA, including buses on freeways, had been suggested as early as the 1960s. But Manhattan dreams have always been a badge of urbanist sophistication. A great irony. Planners promise even more of poorly performing rail. The dream (mendacity) goes on no matter decades of poor performance. Costs will continue to escalate and bus service will be cut further.  Policy and reality will keep drifting further apart.

Disruptions describe innovation and competition in the modern market economy. Innovators provide the app and the platform -- and fill in with "gig" workers who, in this case, take care of the refueling and re placing them around town. 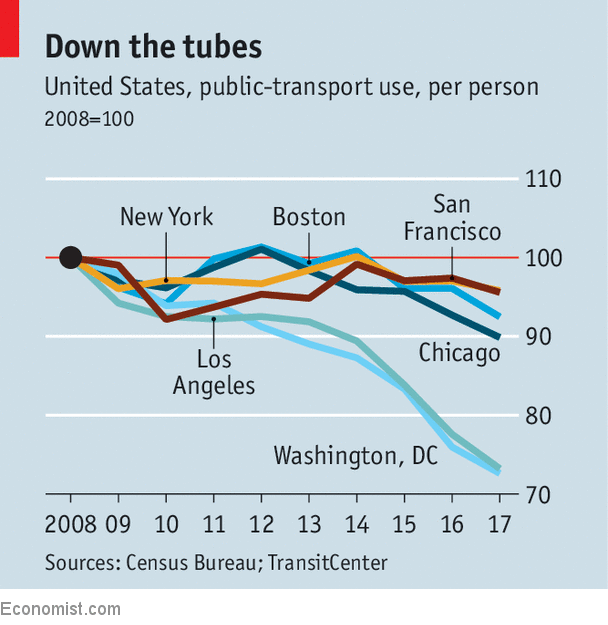 What is the best book I have read (so far) this year?  It is a delightful question as we are fortunate to have so many smart people writing for us. So the question cannot be simple. Let me suggest, however, David Reich's

We humans (and others) carry an inherited tribalism. We learned to communicate and to form and sustain teams in order to survive -- and dominate the planet. suggests that teams up to about 150 had worked best for our kind. Politicians and others conveniently muddle all this by harping on the idea that we all belong to one nation, one "community", etc. . But be very careful about the extent of the village.

Demagogues understand all this and fuel convenient myths of tribal identity and origins. Exhibit A might be Hitler's peculiar stories about ancient and Aryan roots of the German "volk". It worked -- to make smart people very stupid and very nasty. But there are many others examples. Name a demagogue who does not follow a similar script.

Along comes David Reich who shows how modern DNA science strongly suggests that stories about "roots" are mainly bunk.  The evidence shows that our ancestors were many, that they moved around a lot and that they bred promiscuously enough to challenge the idea of any simple genetic commonality.

There are, to be sure, cultural commonalities but they are not "blood" bonds. Which, then, are the better cultures? The ones that accept newcomers. Melting pot is still a great idea. Roots is a horrible and a dangerous idea.